The MsgMon module is a programmers’ tool. Working with Reporter, from Chris Morison and Martin Avison, it allows the details of any Wimp messages passing between applications on the system to be viewed on the screen in real time. 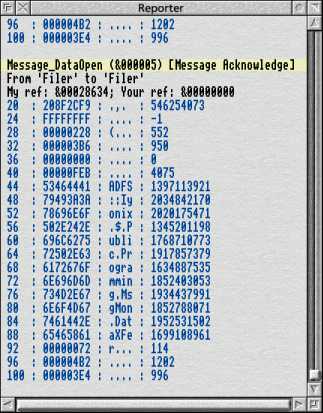 Control is given over which messages are recorded, and once in Reporter the details can be processed and saved in the usual way. Output from MsgMon can co-exist with other software using Reporter.

Download MsgMon
MsgMon is released under Version 1.2 of the European Union Public Licence. Its source code can be found on GitHub.

In order to use MsgMon, you will require: