PrintPDF is a front-end to GhostScript, allowing PDF documents to be produced more easily under RISC OS. It adds a new “PDF Printer” as part of Printers on the iconbar – using this, any application which can print to paper can now also create a PDF document with ease.

A new “PDF” printer on the iconbar

Printing a file to PrintPDF will result in a "Create PDF" dialogue box opening so that the PDF can be saved to disc. 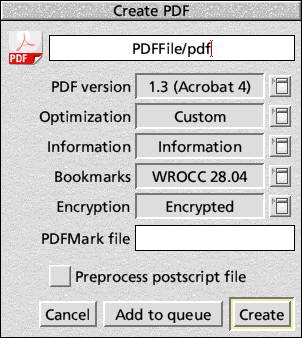 The options being set for a PDF file

More features of PrintPDF, including its ability to add bookmarks to a PDF document, control document title and author information, and join several files into a single PDF, can be found below.

Download PrintPDF
PrintPDF is released under Version 1.1 of the European Union Public Licence. Its source code can be found on GitHub, and copies can also be obtained from PackMan or the PlingStore.

In order to use PrintPDF, you will require:

Control is provided over all aspects of the conversion. The version of PDF can be selected, and any images in the document can be optimised for the intended purpose of the file. Details of the document’s title, author, subject and keywords can be specified: these can be seen in many PDF viewers.

PDF documents can be password protected and encrypted, and PrintPDF offers full control over the available options.

PrintPDF allows bookmarks to be included in PDF documents, using its built-in bookmarks editor. Sets of bookmarks can be created and saved alongside the documents they relate to, then loaded back into PrintPDF when the PDF is created.

Editing bookmarks for a PDF document

The PDF Queue allows several separate printouts to be merged together into a single PDF document. The separate files are printed separately to PrintPDF and queued; once assembled, they can be arranged as required and turned into a single PDF. 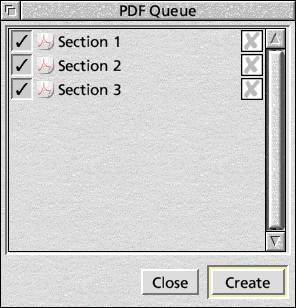