Sudoku 2 is an application written by Derek Baron to create and solve Sudoku puzzles. Partially complete puzzles can be entered and solved on-screen, either by the computer or manually by typing numbers into the grid.

Alternatively, new puzzles can be created by the computer, and either printed out or solved on-screen. 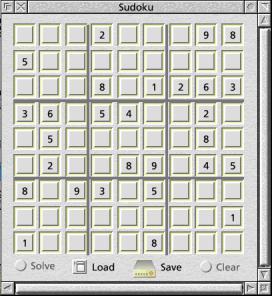 Solving a puzzle with Sudoku 2

Sodoku 2 is developed by Derek Baron; his contact details can be found in the application archive.